Talking about eating disorders at my son's old school this afternoon 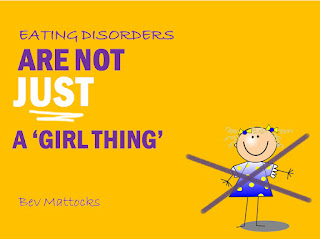 If anyone had said to me a couple of years ago that I would be looking forward to doing a talk on anything, let alone a talk on eating disorders, I'd have said they were mad! But, strangely, since the eating disorders talk for parents and carers which I did at the Institute of Psychiatry the other year and the similar talk I did earlier this year in Edinburgh, I've discovered that giving talks on eating disorders gives me quite a buzz! How odd is that?! Especially for someone that's inherently shy! It's like some actors, I guess, who transform once in front of the footlights.

Read more »
Posted by Bev Mattocks Osborne at 10:59 No comments: