How proud am I of my son? 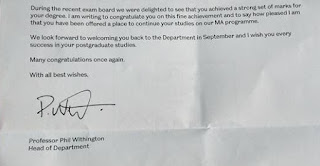 Remember that 18-year old young man who only lasted a few days at university in September 2012? Who found it impossible to cope with the culture shock of embarking on such a hugely different stage of his life when he was still in the later throes of his eating disorder?

Read more »
Posted by Bev Mattocks Osborne at 10:30 No comments: