On the tenth day of Christmas, the ED gave to me... 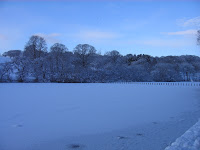 Winter 2009/10 was the winter of the Big Freeze in our part of the UK - the year the huge lake in our local park froze solid which, of course, meant that its resident swans were unable to swim on it. But meanwhile Ben and I continued our regular walks from our house, through into the park, round the lakes and back home - a route we've trudged many, many times during the eating disorder.

Autumn would lead to Winter which would lead to Spring and then Summer - and for a whole year we'd do that walk which was also a great opportunity for us to talk about things.

For an entire year I felt as if I was flogging a dead horse. No matter what I said, it fell on deaf ears. Ben was unable to see logic or reason. He would argue that black was white until he was blue in the face.

In the Big Freeze that followed Christmas 2009, Ben really WAS blue in the face. Having lost so much weight he felt the cold more than most people so he wrapped up warm against the freezing temperatures.

And I was painfully aware that, beneath the chunky sweater, jacket, hat, scarf and gloves was an increasingly emaciated body.

His illness became even more noticeable as we stopped off in the park cafe for a warm drink (black coffee for Ben, naturally...).

As usual, Ben was drawn to these like a magnet. Not to eat them, of course, but to admire them - as you or I might admire works of art hanging in an art gallery. He'd just hover there, mesmerized by the cakes, serving staff coming over to ask if he'd like to order a slice, and giving him odd looks when he shook his head, yet continued to stare...

Then he'd come over to where I was sitting and insist I come and 'admire' the cakes as well.

There we were, in the Christmas and New Year season, living in the Western World with festive food abundantly available yet my son was starving himself.

But, fortunately for the swans, just outside the cafe someone had broken a large section of the ice so they could swim around a bit, fighting with the ducks and other wildfowl for the chunks of bread being tossed into the water by young families.

At least the swans were enjoying their food.
Posted by Bev Mattocks Osborne at 08:26