"Will my son always be stuck standing short of the 'finish line'?" I asked myself in September 2015 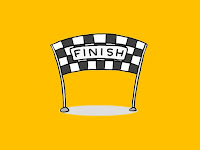 In September 2015 I was toying with the idea of writing a sequel to my book Please eat... A mother's struggle to free her teenage son from anorexia and I wrote this in the Diaro app:

The book will be about me

Rather than my son. Mainly. How I coped (or didn't) with getting my life back. The blips we had, my worries about his weight and relapse. He is not the person he used to be and it's upsetting. But might he have been this person regardless?

At the time I was obviously wondering if 'almost there' was where my son would always be and that he'd never get back to being the person he was before the anorexia hijacked his life.

I was worried that he would never get the weight back on him, never eat 100% normally, never stop counting calories and weighing out food, and so on.

It's a question I often see from parents on the Around The Dinner Table Forum. This wondering if we're asking too much in seeking full and unconditional recovery from the eating disorder and that, if some (less enlightened) treatment teams imply that some young people always stop short of the finish line and that this is the best we can expect, they must somehow be right.

Yet we have battled to get our child this far; we owe it to them to help them recover fully and get their lives back.

My son was told "We're happy to settle for 'good enough' if you are, Ben" and that "Some young people choose to remain at a low weight because they find it easier to cope with".

When I heard these words my whole being screamed out: "Noooooo!!!!!"

Yet, by September 2015, six years after Ben's eating disorder first emerged, I was still saying things like: "My son is 95% recovered." I simply wasn't able to say the words "fully recovered" despite enormous advances having been made and despite Ben being 'almost there'.

I would say that it took a further two years, almost to the present day, for me to look at  Ben and think "Yes, this is what full recovery looks like". The flesh was back on his bones, the light was back in his eyes, the smile was back on his face and the food was still being eaten properly and normally.

I believe that full recovery from an eating disorder is possible and that families should NEVER be told that they may have to settle for 'second best'.

That limbo-land where the finish line is in sight but where they stop short.

If we - treatment team, parents and the patient themselves - have fought tooth and nail to get this far, why the hell should we stop here?

But that final push wasn't solely due to my encouragement and support; it was almost entirely down to my son who refused to give up and pushed himself towards and across that line, and began to live life as it should be lived: to the full.

Without any signs of the eating disorder.