Here's what my son, Ben, is saying on World Mental Health Day today 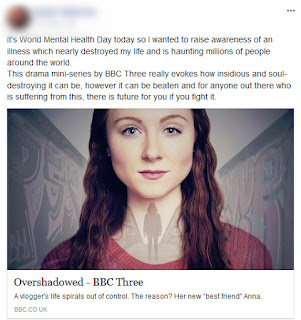 If you've not seen it yet, you live in the UK and you don't think it will trigger you, BBC3's recent drama Overshadowed, A vlogger's life spirals out of control. The reason? Her new “best friend” Anna. You can watch it here on BBC iPlayer.

This is a very real portrayal of what an eating disorder like Anorexia can be really like, written by a former sufferer who plays 'Anna' in the drama (the 'eating disorder voice').

The incident in the friend's bathroom is particularly reminiscent of our own experiences with Anorexia; it reminds me of the time when my son had his friends round for a sleepover on that first Christmas with the eating disorder in 2009. Something set him off and he came screaming downstairs in the middle of the night in a similar state to Imo in Episode 6.


Today is World Mental Health Day and this is what my son has posted on his Facebook page:

It's World Mental Health Day today so I wanted to raise awareness of an illness which nearly destroyed my life and is haunting millions of people around the world. This drama mini-series by BBC Three really evokes how insidious and soul-destroying it can be, however it can be beaten and for anyone out there who is suffering from this, there is future for you if you fight it.