Ben's been at school this afternoon, rehearsing with the other prize winners for Prize Day: the order they need to sit in before they file up to shake the hands of whichever dignitary will be presenting the prizes. In the Good Old Days before the anorexia stripped Ben of his confidence and social skills, he and his friends would sit with the other pupils listening to speech after speech, playing what they call "Prize Day Bingo". Every time the speaker said a typical-prize-day phrase on their list, they'd check it off, trying not to giggle. I wonder if the dignitaries guessed...


Then tomorrow evening it's the Leavers' Ball. Ben's sitting on a table with his old friends. I hope and pray he has fun. Ben's not a drinker, but he could do with a few glasses of cider or wine to help him break the ice. 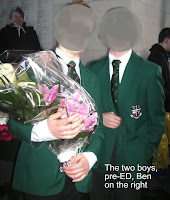 We're sitting on a table with the mum I mentioned in a previous post - the mum I used to stand next to on the touch line when Ben played school rugby on Saturdays. Her son and mine, who were great friends, used to compete with each other in the classroom and on the playing field. They were the same height and build. Now her son is huge. He still plays rugby. And he's Head Boy.

Then on Sunday it's the leavers' service in the little school chapel followed by a buffet meal for the leavers and their families.

To be truthful, I think it's all going to be rather hard for me, surrounded by parents of Ben's peers who've emerged from their school career relatively normally. Everywhere I look I'll be reminded of "what could have been" if the Anorexia hadn't hijacked the second half of Ben's school life.

While Ben was at the rehearsal I popped over to the medical centre with a bunch of flowers for the school nurse. Right from the very first day that Ben started to behave strangely at school, in the Autumn of 2009, she's been a tower of strength.

Whether it was rescuing Ben from the boys' toilets where he was lurking when he should have been in lessons, sitting with him as he ate his Eating Plan packed lunch, walking and talking with him round the school grounds on days when he just couldn't cope or providing a refuge during those months when Ben couldn't bear to be near another young person, she has been absolutely brilliant.

And of course it was she who first told me about CAMHS and suggested I get Ben referred for treatment.

I am eternally grateful.

Posted by Bev Mattocks Osborne at 16:51