Controlling an exercise addiction as part of an eating disorder 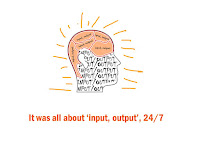 Eating disorders in boys (and girls) aren't just about cutting back on food; there can also be a host of other issues - and one of the big issues that many families face is an addiction to exercise which can be punishingly difficult to fix.

With my son, Ben, exercise acted as a kind of purge - not unlike Bulimia with its vomiting / laxative purging. He felt the need to micro-manage input and output: whatever went in (food and drink) had to come out in the form of exercise. Often entire days (and nights) could be centred upon input, output, without any room inside his head for anything else.


I'm a regular contributor on the Around The Dinner Table forum (for parents of young people with eating disorders). If our experiences about recovering from an eating disorder can help other families who are facing similar challenges, then that's a Good Thing. And one of the regular issues facing families is this addiction to exercise.

Here's an edited version of some replies I made this weekend on a post created by a parent who was struggling to break their daughter's addiction to exercise (IMPORTANT: Please note that exercising with an eating disorder can be potentially dangerous so be sure to check with your child's physician first):

As part of his eating disorder, my son was addicted to exercise - you wouldn't believe how much he used to pack into every day! Or maybe you would... He would even ask to be excused from school lessons to 'go to the bathroom' only to run round the block instead. He even did sit-ups in his art GCSE exam when the invigilator wasn't looking. Addiction to exercise as part of an eating disorder was a massive problem for us and he admitted that he took any opportunity to exercise, even punching the air if standing still. He also admitted that he HATED exercising, but the eating disorder wouldn't let  him stop.

The exercise addiction wasn't easy to fix; indeed it took longer than most of the eating disorder issues to fix but we finally did it by officially agreeing that he could only exercise within certain parameters and once he'd done that he wasn't permitted to do any more. This made it easier for him to control the exercising rather than the exercising controlling him. In an ideal world I'd have liked him to stop exercising altogether (because of the dangers as well as the fact that it burned off vital calories), but I could see that, with him, it simply wasn't going to happen and so the agreement (which was part of our 'famous' eating disorder Recovery Contract) helped to contain it. And it worked very well.

As I said above, in an ideal world we would have stopped all exercise, but (for various reasons including the fact that our treatment team were advocating for limited exercise) I could see that wasn't going to happen. HOWEVER it is so important that you keep an eye on your son or daughter because I am sure that there are some situations with an eating disorder where even a small amount of exercise could be dangerous.

With us it was also very important that my son was telling the whole truth and nothing but the truth as regards to how much exercise he was doing. Thankfully we'd arrived at a stage where I could trust him and, to be honest, he was so relieved to have something that would allow him to control his out-of-control exercising. It was also important that we could discuss any problems he was having with keeping within the parameters. But I honestly believe that he stuck to it which is brilliant.

As time went on he naturally began to exercise less. These days, now aged 23 and recovered from the eating disorder, he'll just do a handful of situps every day which I think is pretty normal for a young man. He no longer feels that dreadful urge to exercise or get upset because he's 'been sitting around doing nothing' all afternoon / day / hour, etc. So the exercise problem became increasingly easy to deal with as he recovered from the eating disorder.

I hope this encourages other parents - but do keep a close eye on your child's health if they have an eating disorder and are still exercising, won't you? I would strongly suggest checking with your GP / paediatrician / physician that, in their opinion, it's safe for your child to exercise. Exercising can be dangerous.

Here's what the Kartini Clinic says about exercise and anorexia.
Posted by Bev Mattocks Osborne at 12:05