"Life stops until you eat," say the eating disorder experts 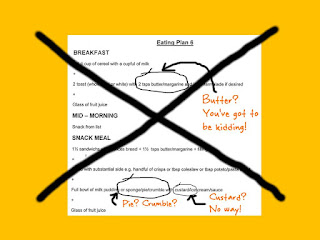 It was F.E.A.S.T., I think, that coined the excellent phrase: "Life stops until you eat" - a phrase which I've heard many, many times on the F.E.A.S.T. forum, Around The Dinner Table, when it comes to getting your eating disordered child to eat. On Tuesday, the US-based Kartini Clinic's Dr Julie O'Toole blogged about the same topic. The topic talks about how to continue to get your child to eat and put on weight once they've been discharged from formal treatment for their eating disorder. In a nutshell, whenever they resist, you tell them that "Life stops until you eat". As Dr O'Toole says: "No friends, no going out, no cell phone, no parties, no car, no clothes shopping, no college visits. The first job is to nourish the body and all else comes after that." Indeed the focus of Family Based Therapy (FBT) as an evidenced-based model for the treatment of anorexia in adolescents is, first and foremost, "Life stops until you eat".


How I wish I'd had this information to show to Ben's eating disorder treatment team back in 2010-12. As you may know, with  Ben's treatment, food and eating came secondary to the "talking treatment". Ben had to "want to recover" before anything could happen. He would, in theory, begin to eat sufficient food once he saw "what the scales were telling him" every week. The scales would "prove to him" that he needed to "eat more to put on weight".

At our very first CAMHS (Child & Adolescent Mental Health Services) session in early 2010, I asked if there would be an eating plan for Ben. I took this for granted, based on what I'd been reading, along with my gut instinct as a mother who had already been battling with my son's eating disorder for several months before Ben began treatment.

CAMHS fished around in their files and produced something called Eating Plan 6 which required the patient to eat all sorts of high-calorie foods that I knew Ben would never eat in a million years.

Not without some serious support from CAMHS, literally sitting down at the dinner table with us.

But this didn't happen and, to get Ben to eat more food, I had to tweak the eating plan considerably. However I did manage to get him to put on a few kilos during those first few months with CAMHS.

But, as Ben's anxiety rocketed as a result of the weight gain, it was decided to withdraw "Mum's eating plan" (as it became known) as it wasn't proving "helpful" to my son. Instead, Ben would prepare his own meals (except for the evening meal which I would prepare). This way he would gradually learn how much he needed to eat to put on weight, as proven by the weekly weighing sessions.

Meanwhile, once a week (or once a fortnight after just a few months at CAMHS), Ben saw the psychiatrist individually while I saw the CAMHS nurse for what were called "parenting sessions" which, to me, were all about making me a better parent and, importantly, showing me how to be less anxious about the whole thing and back off a little on the topics of food and eating.

At one of these sessions I was informed that Ben had to "want to get better" before any change could take place.

So we waited and waited for Ben to "want to get better" while he reacted to whatever the scales were telling him. Weight loss was followed by a relatively relaxed CAHMS session whereas any weight gain would result in the entire session being hijacked by the need to pacify a frantic Ben who would promptly cut back on his food intake to avoid getting "fat".

If only the approach had been "life stops until you eat".

If only I'd been viewed as a good parent who was only anxious because I'd already been going through hell for several months before we arrived at CAMHS and I was well aware of the dangers of eating disorders.

If only the focus had been on getting Ben to eat first and foremost, of getting full nutrition into him and getting him back to his pre-anorexia weight, not settling for "good enough", suggesting he could "chose a final weight he felt happy with" or "what some young people prefer to do" which was to remain at a lower weight, a weight that they can handle without too much anxiety.

It should have been a case of "life stops until you eat".

But it wasn't. And Ben was discharged after 26 months of treatment at the same weight he was when he started.

Posted by Bev Mattocks Osborne at 12:31