Turning stuff on its head, the "myth of motivation in adolescent eating disorder recovery" 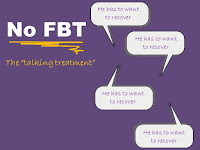 I clicked onto this article today and it made me laugh in a kind of grim ironic sort of way. The author talks about "how I’ve sat with many worried parents, desperate to do what is right for their adolescent child, who say, 'I really want her to get help, but it’s just not the right time. She has to want to get better.'". It goes on to explain why parents need to learn that eating disorders are serious brain illnesses and the reasons why none of us can simply can't wait for them to "want to get better". Indeed why, waiting for them to "want to recover" is a dangerous myth.


What made me laugh in a grim and ironic kind of way was the fact that, with us, this was turned on its head. Instead of the parents believing that the child had to "want to recover", it was the eating disorder treatment team that believed this. I, as the parent, just wanted them to get him to eat.

At one point I responded to this with: "But what he if never wants to recover?" and they just shrugged their shoulders as if to say "well, that's just one of those things".

They didn't actually have an answer.

It made me see red.

It still makes me see red.

How I wish I'd had this article to brandish in front of them to prove that they were wrong in this belief. Dangerously wrong.

These days parents in our city receive evidence-based FBT (Family Based Therapy) which, while I'm on the subject of things being turned on their heads, is a treatment model that's turned the treatment of anorexia in adolescents on its head.

As the article says: "The idea is that in order to be helped, the person suffering has to reach the lowest point and, having lost everything, be willing to seek and accept help from others. Fortunately for the millions of individuals who suffer from eating disorders, this is not the truth. When it comes to adolescents with eating disorders, it’s in fact a misguided and dangerous falsehood."
Posted by Bev Mattocks Osborne at 17:32